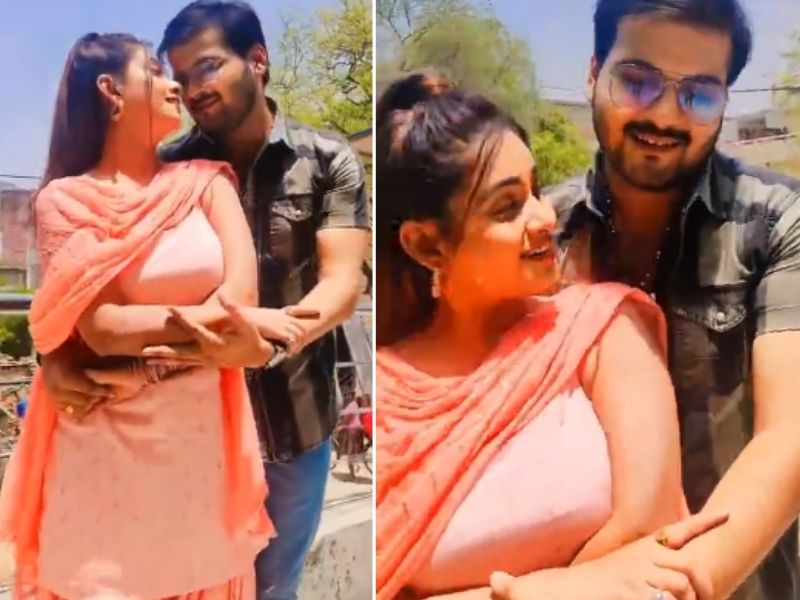 Bhojpuri actress Ritu Singh is in discussion these days about her upcoming film ‘Bhagwat Geeta’. In this, she is playing the lead role with actor Gaurav Jha. You will get to see the great love chemistry between the two stars. This movie is a romantic movie. Its trailer video has also been released, which got a good response from the audience. Fans have become excited about this movie. In such a situation, the actress has been seen romancing Arvind Akela Kallu on the best romantic song of the film ‘Jogiya’. He has shared its video from his Instagram account.

Ritu Singh has shared her romantic reel video on Instagram, in which she can be seen with actor Arvind Akela Kallu. It can be seen in the video that actress Ritu Singh is seen in a suit salwar and looks very cute with simple makeup. His expressions from above are amazing. Ritu is giving a great performance on her song. At the same time, Arvind Akela Kallu can be seen in a very casual look in the video. He is showing romantic chemistry with the actress. Amazing chemistry between the two stars is getting to see. Everyone is very much liking it. The video of the song has got more than a thousand likes and fans are commenting fiercely. Fans are not tired of praising their favorite star.

Fans are very fond of the chemistry between Arvind Akela Kallu and Ritu Singh. His videos are being liked a lot. Even before this, both have worked together in reel videos, music videos and many films.

Trailer of ‘Bhagwat Geeta’ has been released

Let us tell you that the trailer video of Bhojpuri film ‘Bhagwat Geeta’ has been released. It has got more than one million views. The video was released on 3 May. It stars actor Gaurav Jha along with Ritu Singh. The payoff of both the stars is quite interesting and there is a great romantic chemistry to be seen between them. The trailer of the film is full of action, comedy and romance. Superb graphics have also been used in this. This Bhojpuri film is being told of a different level. It is directed by Sunil Upadhyay and produced by Gaurav Jha. It has been produced under the banner of Third Door Entertainment.

Now translation can be done in Sanskrit too, Google has added eight Indian languages ​​including Bhojpuri

Aries | Aries Aries, today you will get a lot of respect from the official class. Boss will be happy

Google Translate made languages ​​easy, 8 languages ​​including Sanskrit and Bhojpuri were linked with translation

Now Google can translate in Sanskrit & 7 other Indian languages ​​too! Find out. – NewsOnAIR –

24 new languages ​​added to Google Translate, including Bhojpuri and Assamese

Bhojpuri: Kajal Raghavani and Anand Ojha’s Bhojpuri film ‘Ran’ will be released on May 13 in Bihar, Jharkhand

Now translation can be done in Sanskrit too, Google has added eight Indian languages ​​including Bhojpuri

Google Translate made languages ​​easy, 8 languages ​​including Sanskrit and Bhojpuri were linked with translation