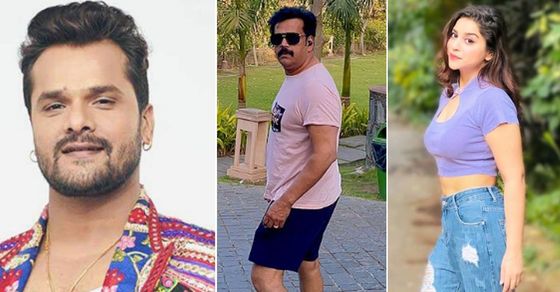 Ravi Kishan is a famous name not only in Bhojpuri but also in the film world. He gained recognition in Bhojpuri and Bollywood with his acting and singing. Ravi Kishan is also active in politics and is currently a Member of Parliament from the Bharatiya Janata Party. Ravi Kishan’s name is also included in the list of Bhojpuri stars trapped in controversies. Some time ago there was an uproar over Ravi Kishan’s statement on corona virus. In fact, actor and MP Ravi Kishan had said in his statement in the Lok Sabha that Kumbh Mela should not be held responsible for the spread of corona virus. After his statement, people criticized him fiercely.

Bhojpuri superstar Khesari Lal Yadav is also not spared from controversies. Khesari has been in controversies regarding his song and for this an FIR has also been registered against him. At the same time, Khesari had to go to jail for another dispute. Actually, some time ago Khesari sang a song, whose name was ‘Auntie Ke Bachi Sapanwa Mein Aati Hai’. Khesari’s trouble increased only after the release of this song. A person named Surjit Singh lodged an FIR against Khesari in Mumbai. The man accused Khesari of insulting women. After this Khesari also sang a song on Sania Mirza, for which he had to go to jail.

Powerstar Pawan Singh of Bhojpuri cinema often remains in the discussion about his personal life. These days Pawan has been in limelight for the news of divorce from second wife Jyoti Singh. Earlier, Pawan Singh was also in discussion at the time of the suicide of his first wife Neelam. But no statement came from Pawan’s side regarding this. But Pawan’s dispute with actress Akshara Singh is such a dispute in the Bhojpuri industry that gets fresh from time to time. Actually Pawan and Akshara were dating each other. But suddenly Pawan got married and their relationship broke up. After this, Akshara filed a case accusing Pawan of drinking and assaulting him and threatening to end his career.

Bhojpuri actress Anara Gupta remains in a lot of discussion about her boldness. Anara’s personal life was also surrounded by many controversies. Anara Gupta’s CD scandal surfaced in 2004. As soon as Anara’s objectionable CD came in the market, she became embroiled in discussion and controversies. After this, Anara Gupta was also accused of cheating of Rs 200 crore. Five people were accused of cheating, including Anara’s name. A film has also been made on the controversies related to Anara’s life, whose name is ‘Miss Anara’.

Veer Singh of Nalanda will be seen in Bhojpuri film Yamdoot, poster of the film released in Bihar Sharif Khesari vs Pawan: Pawan Singh’s attack on Khesari Lal Yadav without taking name, said – the poison of casteism is being sown through songs…

Bhojpuri Talkies: The release of ‘Ran’, a film based on Army Man, tomorrow… The story also has romance, emotion, action and personal revenge.

Google | Now you will be able to translate in Sanskrit too, Google has added these 8 Indian languages ​​including Bhojpuri with them

Monalisa Husband Vikrant to Nidhi Jha and Smabhavana seth, know about the real life partners of these Bhojpuri actresses, some took divorce

Google Translate Update: Now you will be able to translate in 24 languages ​​​​like Bhojpuri, Maithili and Sanskrit

Bhojpuri Talkies: The release of ‘Ran’, a film based on Army Man, tomorrow… The story also has romance, emotion, action and personal revenge.

Kajal Raghavani was seen in a sizzling look with Pradeep Pandey Chintu in the new song ‘Lahanga Chalelu Lasar ke’, the video is superb